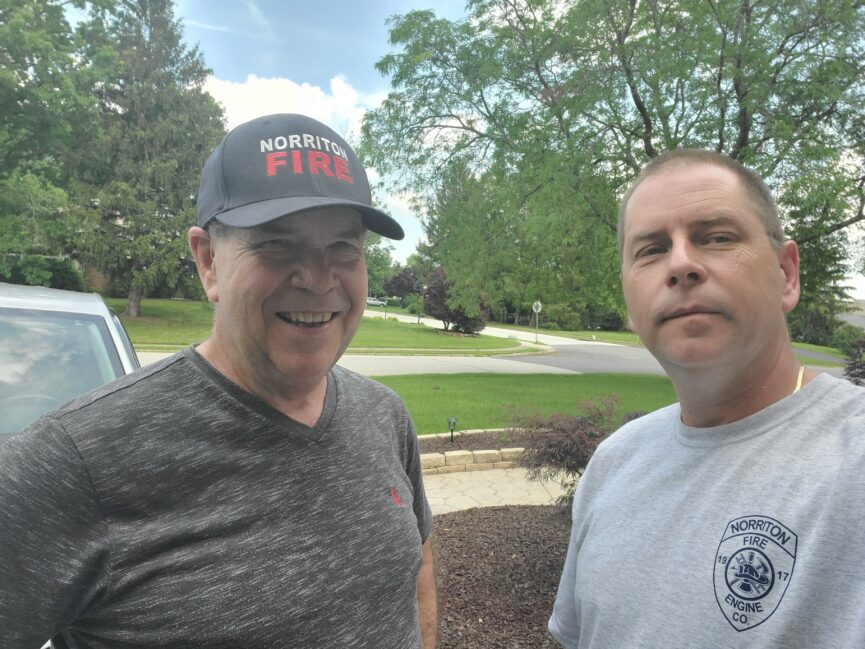 Volunteer firefighting is often passed down through the generations from father to son. Fathers bring their sons with them to the firehouse and the sons realize they want to fight fires and create lifelong friendships too. At Norriton Fire Engine Company, this was the case for Dave Ellick Sr., 78, and his son, Dave Ellick Jr., 53.

Dave Sr. joined Norriton Fire Engine Company more than 40 years ago. “I was always excited by the lights and sirens,” he said. “I love the excitement and helping people.”

Dave Sr. grew up in North East Philadelphia next door to a fireman. “He would take me to the station sometimes, and let me on the trucks and ring the bell.”

When Dave Sr. moved to East Norriton Township, he met a Norriton Fire Engine Company volunteer who helped him join the fire company.

Just like Dave Sr.’s neighbor used to do, Dave Sr. took his son, Dave Jr. to the fire house with him.

“It was a tight-knit group of volunteers and there were a lot of activities to do,” said Dave Jr., who started volunteering when he was old enough to join. Back then, Norriton Fire Engine Company didn’t have its junior firefighting program for teens ages 16 and 17, so Dave Jr. started as a firefighter at 18 years old.

Dave Jr. and his dad describe volunteering together as nothing but a positive experience. “It could not be better,” said Dave Sr. “He is smart, loves it like me and meets a lot of good people while helping those in need.”

While the pair have been on countless fire calls together, they often have two very different duties. Dave Sr. could be a driver, helping with water pumping at scenes or operating the ladder truck while Dave Jr. was firefighting inside the homes or buildings.

At 78 years old, Dave Sr. still responds to calls when he can and operates the equipment if needed. He is also on the Board of Trustees, helps with administrative work and used to serve in officer positions.

“My dad is always looking to help somebody else and always wants to make sure everyone is included,” said Dave Jr, who also took on leadership roles at Norriton Fire Engine Company. He served as fire chief for two terms, deputy chief for several terms and served in an officer position for more than 20 years.

As a former chief and deputy chief, Dave Jr. said he learned to lead from the people who came before him. “When you’re taking a team of personnel into a burning building, you can’t take your decisions lightly,” he said.

Volunteer firefighting has also given Dave Jr. the ability to develop rapport with people and interact with the general public. “You meet different people every day,” he said. “Unfortunately, you’re interacting with them on one of their worst days, but it helps you understand what others go through and have compassion for them.”

While many firefighters may join out of tradition, Norriton Fire Engine Company also has a lot of volunteers who started with no experience or family background in firefighting. The fire company provides free gear and training to all members. Volunteer opportunities include firefighter, junior firefighter for teens ages 16 and 17, fire police and administrative roles.

For anyone interested in volunteering, fill out an inquiry form at https://norritonfire.org/contact/ and a volunteer will be in touch soon.