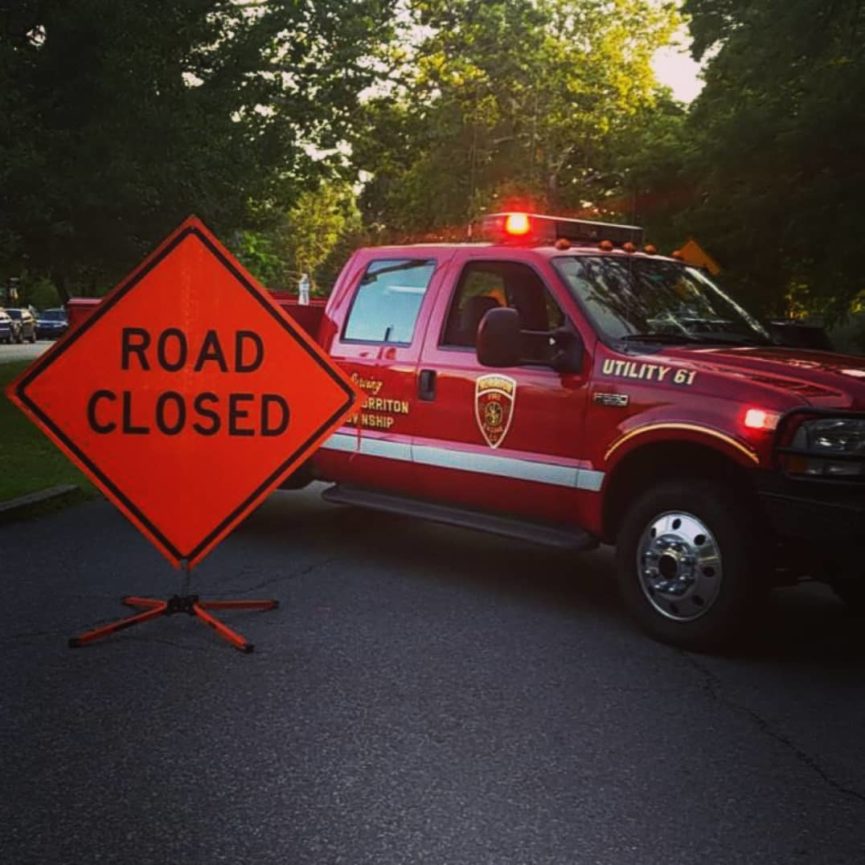 For volunteers who may not want to fight fires, but still want to be in the center of the action and help the community, volunteering as fire police is the perfect fit. During emergencies and events, fire police direct traffic and crowds while working with other first responders.

Fire Police Captain and firefighter James “Jim” Fessler has been volunteering at Norriton for 15 years and captain for seven.

Currently, Norriton Fire Engine Company only has two fire police volunteers. Fire Police Captain James “Jim” Fessler is one of them, and has been volunteering at Norriton for 15 years and as captain for seven. He normally serves as a firefighter, but when he is on a fire scene in East Norriton Township and is not needed as a firefighter, he will serve as fire police.

At fires or car accidents he assesses the scene to decide if road closures are needed. Then he is in command of the “bubble” of the incident – limiting the number of people inside by controlling who goes in and out of the bubble, and making sure that everyone inside is safe. “This role requires a lot of demand and thinking on my toes,” said Fessler.

He credits his training and skills from the late Fire Police Captain Willy Boyd, who was a mentor and friend. “He taught me a lot about fire police and life,” said Fessler. “He was a great role model and I miss him every day.”

While Fessler enjoys the challenges of fire police work, he also loves the more laid back side of it, which includes road closures and traffic control for holiday events, parades, fairs, car shows and other events where he can engage with the community more. “I travel around Montgomery County to help with events like the Hatboro Car Show and Lower Providence Fair,” said Fessler. “After finishing my fire police duties, I can attend the events so that is pretty fun.”

Fessler believes a hands-on approach to training is the most effective. “Do a ride along with me so you can see what I see,” said Fessler. “I’m always available to talk – call, text or email – to anyone who is interested in volunteering as fire police.”

Another way to volunteer at Norriton Fire Engine Company without fighting fires is to serve as an administrative volunteer. Although they are behind the scenes of the fire company, they are just as essential to serve the community.

Administrative volunteers are voted in and serve in their roles for one-year terms. All positions are currently full, but it always helps to have others who are interested in the work. Tricia Ellick, for example, has been treasurer for five years and stepped in after the former treasurer could no longer serve due to personal reasons. As the head of operations for a bank, Ellick was a great fit to manage the fire company’s two accounts: one for fire house expenses such as utilities and the other for relief association to protect the firefighters. Additionally, Ellick’s husband, Dave Ellick Jr., has been a firefighter there for more than 35 years, so she always had a connection to the station and was involved there with fundraisers and events.

“Fulfilling the need is what means the most to me and also what I like the most about volunteering because I see the end results,” said Ellick. Some of these end results includes her role in working with grant writers by providing them with financial information and following through with required documentation. Ellick worked with the grant writer to be awarded the Staffing for Adequate Fire & Emergency Response (SAFER) grant by the Federal Emergency Management Agency (FEMA), which allows them to run a volunteer recruitment campaign through 2022.

Ellick understands the value of these grants and her role to the fire company. “Even if you play a behind-the-scenes role such as paying the bills or taking minutes, at the end of the day, you are helping the community.”

While Ellick helps with bills, the minutes are taken by recording secretary Connie Stevenson, who has also been in her role for five years. In addition to the minutes, Stevenson keeps track of important files and serves as the point of contact for the PR and marketing firm, Communication Solutions Group, that runs their recruitment campaign. Although she is outside the public eye for most of her responsibilities, Stevenson loves volunteering for the Santa Run and school fire drills because they are both chances to interact with the public.

Stevenson has always lived in parts of the country where fire companies are run by the city, meaning all positions are paid and full-time. Her dad served as a career firefighter and she was always interested in the fire service. “When I moved here and learned that there were opportunities to volunteer with the fire company, I signed up right away,” said Stevenson. 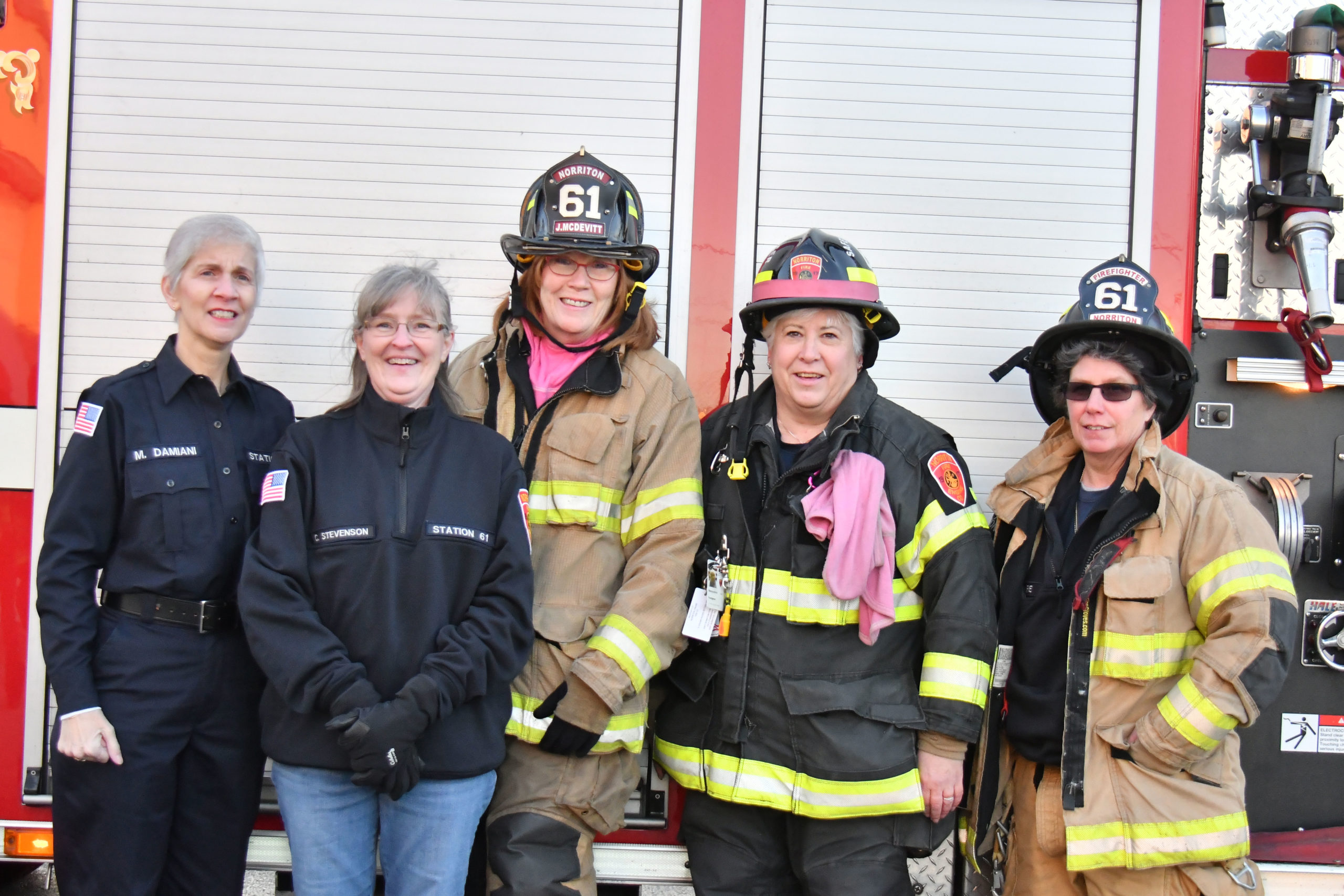 Membership Secretary Marilyn Damiani joined to make a difference as well and has been volunteering for 26 years at Norriton. Almost all of those years were as membership secretary in addition to firefighting for about 20 of them. “I found myself sitting at home, watching TV, and I knew there was more that I could do with my life,” she said.

At the time of joining, there weren’t many other women in the fire service, but she persevered. Due to her small size, she felt weighed down wearing an air pack and the gear needed for internal firefighting. However, instead of giving up, she fought fires outside the buildings instead.

Now she no longer lives inside the township, but she enjoys serving as a membership secretary because it is a way to stay involved with the fire company. A few of her duties include reviewing applications, making sure volunteers have their background checks and bringing them in for interviews.

In addition to the administrative roles, the Board of Trustees is a vital component. To ensure that the fire house is functional at all times, members make arrangements with contractors or landscapers. Norriton needs a certain number of trustees each year.

Why YOU Should Volunteer

While all administrative and trustee roles are currently full for the year, Norriton is always interested in recruiting volunteer firefighters, junior firefighters and fire police. And although every volunteer-run organization needs more volunteers, a fire company certainly has higher stakes. “To have an understaffed fire company can result in greater loss of lives and property,” said Stevenson. “However, I am constantly impressed by the fact that our members can keep up with the high volume of calls that we experience every month.”

The ability to spread the work around would make it much easier on volunteers, especially due to declining membership numbers over the years. “There’s never enough pair of hands and always something that needs to be done,” said Ellick. “Taking on some of the work that is heavy on the shoulders of others is appreciated by current volunteers, which benefits the residents in the community.”

Damiani, Ellick, Fessler and Stevenson all mention the great friendships they have forged at Norriton. “I love that I can give my time to help an organization that is a very important part of our community, but the best part is the friendships that I have made there,” said Stevenson.

During Damiani’s duration there, she has also seen many younger guys come in and grow up at the station. “It was nice to be able to watch so many young volunteers transform into responsible adults,” she said, and encourages incoming volunteers to watch and learn from the more experienced generation there.